Criminal Paul Kagame, A man who couldn’t even spare his childhood friends. 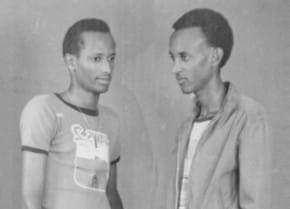 This is a man who couldn’t even spare his childhood friends or military comrades, and sick minds still refer to this blood sucker as a hero.

A hero in what? Killing his childhood friends? Killing his countrymen/women? Killing Africans? Betraying his comrades? Killing over six million Africans in wars that stretches from the western rift valley areas to edges of river Congo.

This ruthless killer is a hero in what? The man and his brutal system are washed in blood of innocent people. Heroism and human rights violations can’t go hand in hand, these are parallel concepts.

Soon, Criminal Paul Kagame’s sins and those of his brutal system will catch up with them……

R.I.P to Fred Rwigema, comrades and all those who have died at the hands of this brutal terrorist and his satanic system.

Previous In remembrance of commander Foca Foca
Next THE DICE IS ROLLING TOWARDS TREACHEROUS ASSASSIN GEN JAMES KABAREBE.