Flashback: Reflection, today 4th of July, was a day the RPF/RPA acquired – took power in Rwanda.

Today 4th of July, was a day the RPF/RPA acquired – took power in Rwanda. This year, the day has come at a time when the Country is at cross road, the Rwandan society broken, economic hardship hitting households at unprecedented levels, massive unemployment, dilapidated health services, failing infrastructure system, the education system which doesn’t fit any purpose, a society ravaged with hunger and hate. State sponsored crimes on the increase; kidnapping, incarceration, torture and assassination being state policies.

This year’s 4th of July finds the criminal ruler politically isolated, his foreign protectors like the Clintons and Tony Blair are no longer influential in the world political scene as before; the international ball game has changed. His Public Relations friends at state department in USA where all pushed out by the Trump administration. This is a man who has survived through paying enormously to foreign public relation firms for his imaging, turning his domestic image of a brutal dictator to an international image of a statesman – double imaging model as known in P.R. 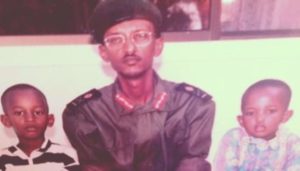 This day will remain significant for those Rwandans who grew up or born outside the country, finally they had an identity, what they would call home. “With any single lie, trust ends.” These few words from a great friend came into my mind when contemplating about this day, how the Rwandan society is broken. The social upheaval which started on the echelon of power – village Urugwiro has affected in one-way or another everyone; a society that is consumed with lies, deceit, intrigue, selfishness, betrayal, jealous and hate.

All norms which bind the ancestral behaviours dusted to the bins in favour of a cultural darkness which is envisaged by ONE MAN. To this great friend, a lie is a lie, it doesn’t matter how small or big it is; there shouldn’t be an excuse for any single lie. To this friend, the current Rwandan way of deceptive conversation is unholy.

What Kagame has totally managed is to kill the concept of truth and trust; people are living in fear of each other. A simple question is replied with another question rather than answer or replied with a multitude of vague answers. Normal open conversation has totally been destroyed; conversation has been turned into a game of chess. The dude has succeeded in turning everyone to envisage each other with suspicion. This underhand method created through means of close surveillance monitoring has totally destroyed the fabric of the Rwandan society.

When pondering on a friend’s words “With any single lie, trust ends.” I came across an article which depicted horrors of extravagance, resource wastages, selfishness and Arabic profligacy by the RPF at the expense of suffering Rwandan Citizens. This past weekend, around 300 RPF committee members in Europe met in Den Haag, Holland for a three day retreat.

All Rwanda’s diplomatic core in Europe where present with the exception of the ambassador of Rwanda in Belgium, the rest where present. There was a delegation from the RPF central bureau in Rwanda who had come to galvanise these lost souls about the beauty of criminal Paul Kagame’s 3rd term presidency. I will be touching on the quality of these delegates from Rwanda, Goshhh, they totally reflect the RPF and how deep the organisation is sinking.

Don’t be mistaken, the expenses weren’t catered by the RPF coffers but the state. While the economy is under massive contraction with civils servants going for months without pay, on the heel of last month Kagame day extravagance in Belgium; they have again decided to throw another bash in Holland for RPF goons courtesy of the suffering people of Rwanda. All expenses from transportation, lodging, catering……etc paid by the overstretched state coffer.

For those who have visited or lived in Den Haag will know how the city is relatively expensive, next to Amsterdam range. Being an administrative city of Holland combine with large student population, this makes the city relatively expensive. And this is a place where criminal Paul Kagame decided to hold resource squandering bash for his goons in Europe.

These SICKOS have forgotten RPA/RDF casualties of war who are living in horrible destitution, but they can afford to waste resources in profane functions which have no single positive effect to Rwandans or to those who put their lives in danger during the liberation struggle. These thugs have no single shame in themselves!!!

When you look at the quality which came from Rwanda to conduct these three days retreat, you remain wondering where the RPF is heading. RPF had great, brilliant and intelligent cadres; over the time they were side-lined, others fled the country and the cream/best of these cadres sent to their graves by the brutal regime. To survive under the hijacked RPF, you have to be brainless with no single mind to reason or to air your views. You have to exhibit your brain in solitary confinement.

The RPF delegation from Rwanda was led by Tom Ndahiro, no one needs introduction to this political fabricator. Another RPF delegate member was Bayingana Aimable, Oh My God!! Another member of the delegation was Solange Mubarakh wife to Gen. Mubarakh; formerly an RPF social media poster girl under her informal names of Bebe Kamuzinzi Mubarakh. Of recently, she has disappeared from the social media only to quietly reappear under her formal names of Solange Mubarakh, this time with less noise. How would anyone in a sober mind waste his/her time listening to these inept characters?

When the founding fathers of RPF Inkotayi met in December 1987, Muyenga – Kampala, it was during the 7th congress of RANU that they decided to rebrand the organisation by renaming it, Rwandan Patriotic Front Inkotanyi. During this extraordinary meeting, criminal Paul Kagame who was then a Captain in NRA didn’t attend nor is he one of the founding fathers of RPF. On this day, 4th of July, the RPF founding fathers must be shaking in their graves, for those who are still alive their heart felt feeling of sorrow and mourning is indescribable.

My heart goes to the big commander who is now living in Kampala as a preacher in Jehovah witness, my gratitude goes to sauti ya Simba who is preaching the word of Jesus around Kigali and big salute to all casualties of wars; including those who are losing their limbs on a daily basis due to criminal Paul Kagame’s senseless wars.

Previous Presidents in the greatlakes region have boycotted Kagame day in the enclave
Next AMBASSADOR EPIPHANIE KABUSHEMEYE TO BE BURUNDI’S AMBASSADOR TO UGANDA, THE CURRENT AMBASSADOR – JEAN BOSCO BAREGE HAS BEEN RECALLED BACK TO BURUNDI.