He was thrown out of the army in 2017, after 2 years of Gatabe (agatebe), with criminal Paul Kagame deleting the post of the Inspector General of the Army which he had specifically created to accommodate his then trusted security enforcer – Gen Jack Nziza. 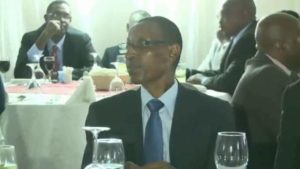 Now, jobless although very loaded/rich, he spends his time cursing how Brig Gen Dan Munyuza outsmarted him. The merchant of death blames his miseries on Brig Gen Dan Munyuza, failing to understand Criminal Paul Kagame’s political outplay of using and dumping you when your usefulness is finished/done. 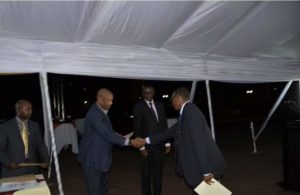 In the photos below which were taken in 2017, Gen James Kabarebe is handing a certificate of retirement to a sadly looking Gen Jack Nziza. The day, his dreams of ever becoming a defence minister in criminal Paul Kagame’s junta government where shattered.

Gen Jack Nziza, you still have time to reconcile with God, Jesus and Rwandans by repenting for the gross human right abuses you committed/commanded against them.

For those who didn’t know, Gen Jack Nziza is a first cousin to Gen Kale Kayihura. True sons of Bufumbira region in Uganda.