With his network of spies under the J3 (James Kabarebe, Jack Nziza and James Musoni) network system, with allies in the military and cliques in political wing – RPF; now the notorious General, James Kabarebe thinks is more positioned to succeed the deadly criminal Paul Kagame alias Pilato. 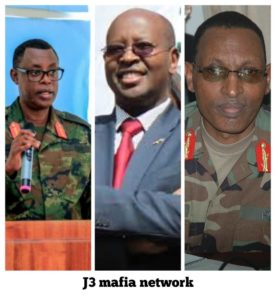 Assassin James Kabarebe is trickery, poisonous in his operations, ruthless, cold blooded and totally callous with a selfish end. He has eliminated all types of people for his survival without sparing those who saved him from his childhood and adult miseries.

Of recently, he has started marketing himself to oppressed, starving and jobless Rwandans as a credible alternative. Obviously, retarded minions within the system can’t analyse the interior dark motives of notorious General, James Kabarebe recent outreach visits in various places in potato enclave.

The notorious General once told his puppet Gen Fred Ibingira who is now under strict house arrest that, “Afande can slap or kick me, but I know what I want. Everything in this world has a price.” The price for being slapped and kicked by brutal Pilato, it’s the presidency.

For the past years, notorious General James Kabarebe has internally destroyed Pilato through giving him fake intelligence info. His the main architecture of the Enclave’s bad neighbouring relationships with brotherly countries. His intelligence on Burundi and Uganda have always been substandard, at most fraudulent. His DR Congo desk has been a mineral plundering, training and arming rebel groups rather than creating a greater diplomatic relationship with DR Congo.

For years, all notorious assassin – Gen James Kabarebe’s briefings to paranoid Pilato have always aimed at making Pilato’s mental condition worse. As Pilato is becoming mentally tired, mentally sick with underlying political, military, social and economic problems engulfing him; notorious General James Kabarebe is steadily positioning himself with the help of his J3 network which is well funded.

The trickery, master of intrigue, selfish and ruthless General James Kabarebe has manipulated:

Despite being sidelined from the ministry of defence to presidential advisor on security and defence; Gen James Kabarebe is still the most dangerous security enforcer in the enclave, and with his J3 mafia network, the treacherous assassin is closing in on the presidency.

Treacherous assassin Gen James Kabarebe is also a forecaster, despite being the underlying ruler of the potato enclave, the brutal treacherous assassin has smartly relocated his family in Europe and North America. With his young sisters Jovia Ingabire Ntungire and Jovans living in Norway and USA respectively. For his wife Esperance Mudenge and his two daughters, they has been leaving in Canada for the past 4 years, with the wife and children avoiding to visit Rwanda for the past one year as the political intrigues and rift between criminal Paul Kagame and treacherous assassin Gen James Kabarebe reach unprecedented levels.

Not only did he ship his family from the potato enclave, treacherous assassin Gen James Kabarebe smartly invested in western Europe under these extended family links.

Previous Kagame’s Rwanda Saw An Electric Car For First Time In 2019
Next Inside the WhatsApp hack: how an Israeli technology was used to spy on Anti Kagame dissidents.