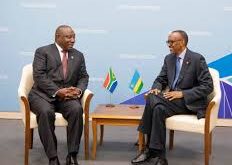 Kagame Put Ramaphosa Under Surveillance while the Rwandan Strongman Sought to Normalize Relations with South Africa.

Kagame has seized SADC’s leading role in the Mozambican war effort. The Rwandan military is already on the battlefield. But the SADC standby force under whose mandate Rwanda was to deploy has yet to be allowed to enter Mozambique.

The 2019 Final report of the UN Group of Experts on the Democratic Republic of the Congo demonstrates that Kagame’s Rwanda is still addicted to DR Congo’s minerals. The report highlights three factors in this regard. 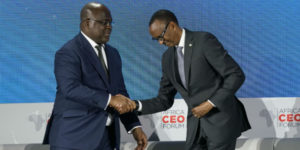 First of all, Rwanda’s gold export figures do not add up. For example,

”Rwanda declared gold exports of 2,163 kg, while the United Arab Emirates officially imported 12,539 kg from Rwanda during the first nine months of 2018.”

”Through its investigation, the Group concluded that gold smugglers from Bukavu and Butembo continued to use the same trading routes as in the past. From Bukavu, traders generally travelled to Kigali…”

Thirdly, the newly launched gold refinery in Kigali, Rwanda, must be carefully watched:

”In February 2019, during a meeting in Kigali, officials of the Government of Rwanda informed the Group that a new gold refinery (Aldango Ltd.) would officially launch its activities later in 2019. The Group believes that relevant government authorities and supply chain actors should monitor the activities of this company in order to ensure that due diligence standards are implemented.”

Aldango LTD is located in Special Economic Zone, Kigali, Rwanda and describes itself as a specialist in the melting of gold and silver, with ”the highest quality and the finest capacity of chemical refining currently available in the world.”

According to Aldango’s executive chairman, Jean de Dieu Mutunzi, ”Aldango is supporting the government to transform Rwanda into a precious metal manufacturing and trading hub across Africa.”
Aldango whose refinery cost US$5 million to build sounds fishy. Who will guard this facade? Rwanda will always be addicted to DRC minerals.

Previous DICTATOR PAUL KAGAME IN DOHA, MAKING HIS 52nd FOREIGN TRIP OF THE YEAR IN A CITY WHERE HE HAS SEVERAL PERSONAL BUSINESS INTERESTS.
Next Kagame’s Rwanda Saw An Electric Car For First Time In 2019