Since the problems of James Musoni surfaced, his aid within RPF headquarter – Aimable Bayingana has disappeared from social media.

Few years ago, precisely 2015, after being threatened on Facebook by Kagamist sycophant Aimable Bayingana known on facebook as Fox Rutinwa, in his several troll comments he warned me of having few days to live. Like Criminal Paul Kagame and his retarded sycophants, they have assumed the powers of life and death. These sickos – illuminates believe to be demi – gods in Rwanda.

Obviously, I didn’t shy away from reminding this sick sycophant about his background – hutu in a criminal sysyem, cautioned him about his criminality of reporting, extortion and land grabbing of his fellow hutus. I told him what tutsis think about him, especially from the francophone areas and reminded him how they used to move away whenever he entered the francophone pub – joint at kwa Celestin in Remera.

As the saying goes, each dog has it’s own day. Since the problems of James Musoni surfaced, his aid within RPF headquarter – Aimable Bayingana aka Fox Rutinwa has disappeared from social media. 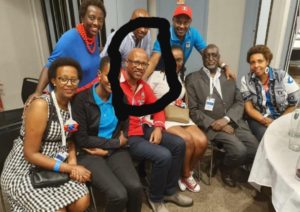 As I told you in my previous posts, the next step of criminal Paul Kagame and his dreaded DMI outfit, it’s to destroy James Musoni’s political and business networks. For months, Criminal Paul Kagame’s blue eyed boy – kaboneka francis has been sacking all local government leaders allied to James Musoni, at the RPF headquarter, the sweeping started few weeks ago and Bayingana Aimable known on social Media as Fox Rutinwa will definitely face the brutal axe.

For years, Bayingana Aimable alias Fox Rutinwa had become a social media troll and menace in intimidating, threatening and insulting Rwandans from different walks of life on social media. This is a person who isn’t even popular among the criminal RPF franchise, just wait and see how he will be eaten by those that he used to constantly praise.

Previous COMING INFO ON THE KIDNAPPING, INCARCERATION AND TORTURE OF MISS JACKIE UMUHOZA
Next PARTY OFFICIALS AT RPF SECRETARIAT ARE CELEBRATING AFTER THE RECENT PROBLEMS OF AN RPF CROOK AND A J3 THUG, AIMABLE BAYINGANA. PART 1