On Saturday, President Museveni started a 195-kilometre (121-mile) walk from Galamba, north of Kampala, and will end on January 10, 2020 in Birembo south of the capital where his rebel army faced one of its toughest battles in the liberation struggle.

Since last year, Directorate of Military Intelligence (DMI) owned and managed news outlets spread toxic articles which are based on fraudulent lies that President Museveni is a cancer sufferer, going as far as giving him few years to live. 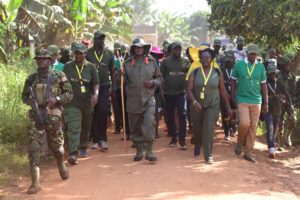 For criminal Paul Kagame and his killer cohorts, find another way of removing Baba Wataifa, health wise, the evil wishful thinking won’t materialise. You have tried all sorts of evil adventures in order to eliminate him, but always backfiring because Jjaja is still protected by God.

Uganda is sovereign nation, and it’s only Ugandans who will determine their destiny rather than a 57 Kg brutal dictator who is terrorising the great Lakes Region.

Yesterday President Museveni noted, “To the Bazukulu who joined me on this #M7Trek, I am happy that you now know some history and have felt a bit of how much people really sacrificed for the collective gains of this country. I thank you.”

Previous REMEMBERING MODEL ALEXIA MUPENDE, ONE YEAR AFTER BEING ASSASSINATED BY THE KAGAMES.
Next LATEST FROM DICTATOR PAUL KAGAME’S HOUSEHOLD.