Breaking news from Burundi: Gen Evariste Ndayishimiye Has Been Nominated As CNDD/FDD Presidential Flag Bearer For May 2020 Election

Gen Evariste Ndayishimiye, the current Secretary General of CNDD/FDD has just been nominated by CNDD/FDD delegates meeting in the administration town of Gitega to represent the ruling party as the presidential flag bearer in the May 2020 elections. Gen Evariste Ndayishimiye has just been nominated to succeed President Peter Nkurunziza as party chair and candidate for the forthcoming Presidential and parliamentary elections. 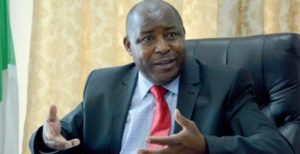 Gen Evariste Ndayishimiye is a tough and discipline person who hates to the core external interference in Burundi’s internal matters. And his stand on criminal Paul Kagame and his terrorist franchise of DMI, is well known. Those incursions that Criminal Paul Kagame’s troops used to make in Burundi, this time, they will be met with dare consequences.

Kigali will be having sleepless nights.

Previous LT COL CHARLES SHEMA, ARE YOU SAFE?
Next THE PRINCESS OF DEATH SOLANGE UWAMAHORO IN CANADA