WHERE IS DR RICHARD SEZIBERA? RWANDA’S MINISTER OF FOREIGN AFFAIRS?

Since 13 July 2019, Rwanda’s foreign minister hasn’t been seen in public. All Rwandans know what happened to him, except the satanic system is trying to hide their heinous crime of trying to poison one of their own in a foreign land.

Since that DMI tweet by using Dr Richard Sezibera’s tweeter account, Rwanda’s foreign minister is yet to come out and address worried oppressed, enclave and starving citizens. Since the tweeter account, what Rwandans have continued to see, it’s Kagamist loud speaker, Olivier Nduhungirehe performing functions and roles meant for Dr Richard Sezibera.

Where is Dr Richard Sezibera? What’s his health situation after an assassination attempt on his life? Previously, Rwanda’s public Relations was run by western PR agencies, with the enclave being in economic difficulties, they no longer have the money to hire these western agencies to run and advise them on their imaging lies and fabrications. Now, the PR machinery is being run a amateurs under the supervision of DMI.

The photo below was taken yesterday, and Olivier Nduhungirehe alias “Budomo mwene Ngurube,” who loves cameras like a Kampala slay queen, was still performing functions and roles meant for Dr Richard Sezibera despite the satanic system telling us that Dr Richard Sezibera is fine and doing well. However, from the 13th July 19 to today, Dr Richard Sezibera hasn’t stepped a foot at the ministry of foreign affairs in Kigali or been seen in public. 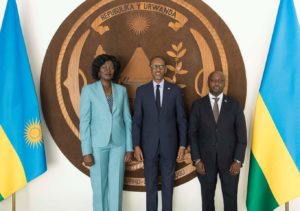 Previous MAJ GEN LEOPOLD KYANDA’S NOTE OF CAUTION TO THOSE WHO ARE EXPORTING TERRORISM TO UGANDA.
Next WHAT HAS MADE ASSASSIN BRIG GEN DAN MUNYUZA LAUGH LIKE THIS, TO THE EXTENT OF SHOWING HIS DENTAL FORMULA?