By: Denise Zaneza ( she is European coordinator for The Global Campaign for Rwandan Human Rights)

Anytime Paul Kagame’s regime can’t directly assassinate someone for various reasons, they dehumanize the person and destroy the person’s image and discredit him or her in the public eye. In addition to that, they make sure that whenever they eventually kill the person, they will have a “cause”. In the case of Barafinda, the cause in the making is metal illness.

This character assassination is not only for people living in Rwanda who challenge the regime on its human rights abuses. This has also been done several times with people who fled the country after collaborating with the RPF regime but then came to the realisation that the regime is a totalitarian and a criminal one.

Many Rwandan exiles have been accused of fabricated crimes and trials where they are always found guilty. If you are a Tutsi you are a thief, if you are a Hutu, you are accused of genocide or having genocide ideology! 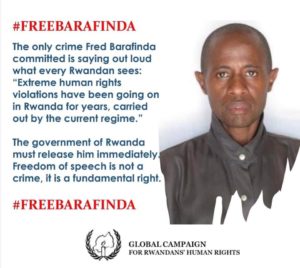 The government of Rwanda has physically tortured Fred Barafinda on multiple occasions, including locking him up in a coffin for several days with his hands and feet bounded. Recently Barafinda was taken to a mental health facility after he dared to challenge the RPF regime on the destruction of poor people’s homes in Kigali.

Barafinda’s only crime is saying out loud what every Rwandan can see : “Extreme human rights violations are being carried out by Paul Kagame’s RPF regime.”

Previous MAJOR MICHAEL MUPENDE: “HOW I SURVIVED THREE ASSASSINATION ATTEMPTS APPROVED BY PAUL KAGAME BUT STAGED BY KAGAME’S DMI HEADED BY KAYUMBA NYAMWASA”.
Next UNDER CRIMINAL PAUL KAGAME AND HIS SATANIC REGIME, ONE BY ONE, EVERYONE WILL CRY: THE TURN OF BWIZA MEDIA AND MNH PROMOTION TO CRY.