Last in December year 2018 and this year on 11 January 19, I warned Lt Charles Kayonga via my Facebook account that his days within the satanic system are numbered. Obviously, the former Kagamist pet didn’t believe info from corporal. 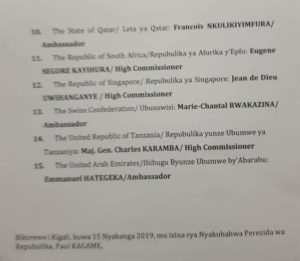 On the other hand, the former boyfriend to Jeannette Kagame Gasana, Alfred Kalisa, known as Kalisa BCDI has been moved from the enclave’s ambassadorial post in Angola and moved to Egypt.

In 2007, Pilato grabbed Alfred Kalisa’s bank and then through him in jail. He later released him and he spent years in Kigali as a pauper only to be nominated as Rwanda’s ambassador to Angola in 2015, today he has been relocated to Egypt.