For those who have studied or taught PR, all know that PR isn’t a role for amateurs, in PR you have to understand when your giving free publicity or when you aren’t. When your running a government or institution PR, the main objective is to avoid giving free publicity to unintended subject/person/organisation..etc.

For Rwanda’s opposition organisation most especially RNC and human rights activists such as Diane Rwigara, have got free Public Relations advertisements because they have constantly received free advertisements/publicity from the Satanic system ruling the potato enclave.

For me, I have no single complaint, because I am always getting free publicity, the more they react against me in their different social media accounts run at criminal Paul Kagame’s office – village Urugwiro, the more oppressed and enslaved Rwandans research to find out about my messages, same applies to other numerous pro democracy and human rights activists.

According to my source within criminal Paul Kagame’s office – village Urugwiro, this social media team which operates under the ruler’s communication department is headed by a narcissistic character named Stephanie Nyombayire, the refreshing part, it’s how this character that runs different social media pseudo accounts is hated by co-workers within Pilato’s office – Village Urugwiro. What I was told by different sources within Village Urugwiro about this woman, it’s not good for public consumption. In short, she is soon matching Ines Mpambara among individuals who are hated within Village Urugwiro including members of the presidential guard.

Thanks to my source within Village Urugwiro, all the social media accounts she runs have been told to me. On my case, I have no single complaint due to great work of providing me with free publicity; obviously these inept minions think otherwise.

Stephanie Nyombayire who tags herself as the director general of communication in criminal Paul Kagame’s office is a sister to Sandra Umutoni the current CEO of Jeannette Kagame Gasana’s imbuto foundation. A foundation that has been used as a channel for embezzling western donor funds and laundering of the embezzled funds. 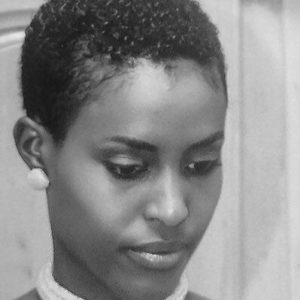 Stephanie Nyombayire, a minion who now assumes to be a senior member of the satanic system ruling the enclave

Therefore, Stephanie Nyombayire is a minion of a satanic system which feeds her and her entire family at the expense of oppressed, enslaved, starving and unemployed Rwandans. According to my village Urugwiro sources, they note that, “she is a person who has obtained scholarships through family connections rather than intellectual capacity.” During Ange Kagame’s wedding, Stephanie Nyombayire was among the matrons, thus psychologically thinking, that she is a member of the inner circle.

One simple thing which I have observed, it’s the clear intelligence of anti Kagame activists and dissidents in avoiding to waste their ample time on Kagamist minions – Banyampi, only focusing on top echelons of the satanic system. Great work.

Below it’s Stephanie Nyombayire who runs different social media accounts and a social media team under criminal Paul Kagame’s office which has specialised on reactionary evil behaviours. The team is attached to communication department at the president’s office – village Urugwiro.

Previous PRESS RELEASE: FIFTH ANNIVERSARY OF THE ILLEGAL DETENTION OF OUR FATHER, FRANK KANYAMBO RUSAGARA
Next CRIMINAL PAUL KAGAME HAS BEEN THE BIGGEST SUPPLIER OF BLACK MARKET MILITARY WEAPONS TO DIFFERENT ARMED FACTIONS.